For Benalla horseman Russell Osborne and his wife, veterinarian Caroline Duddy, their circumstances were perhaps a little bit more straight forward when a client hit on hard times, both financially and health-wise, which forced him to relinquish the ownership of several broodmares and a filly he’d bred. 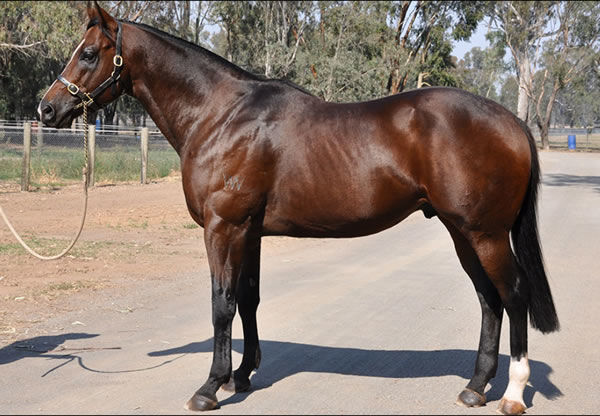 Osborne and Duddy run Riverbank Farm at Benalla and stand seven stallions, including Redente, which sired the filly, Red Impulse.

The three year-old has had two starts, kicking off her career late last month with a third over 1000m at Wangaratta and then went two better last week over the same distance at Echuca with Harry Coffey in the saddle.

Osborne explained that they decided to send the filly to Daniel Bowman at Warrnambool to break her in and get her, as he says, rolling along.

“I told the owner we’d send her down there and get her broken in and try to get a bit of money for her from a race or whatever,” Osborne said.

“Daniel broke her in and told us we’d have a lot of fun with her but we wouldn’t sell her for the money that we were sort of asking. He said you might as well take her and if you win a trial with her you might be able to sell her.

“Anyone wanting a horse broken in or trained, you wouldn’t get a more honest person than Daniel in steering us in that direction. He did all the education of her.”

With the client’s stock – broodmares and progeny – sold, Osborne said they decided to keep the filly and have a bit of fun with her. They also retained her dam, Fast Impulse.

“There is no animosity with him (breeder) and I rang him and told him what we are doing and I’m trying to trade out and I don’t want to give anything away that can run,” he said.

“We sold that first one out of her (Fast Impulse) for $8000 and it has won has won about six or seven up in Queensland and the next one we sold to a mob up at Albury and she won a race  and then hurt herself.

“And this one – Red Impulse – has come along so she (Fast Impulse) has had three to race for three winners.”

Osborne said original plan was to sell Red Impulse if she could win a trial but she finished a narrow seconds in the two she had and then plan B was to sell her if she won her first race but she ran third, beaten a length, after missing the start and sitting four deep before running home strongly.

“She got the money the other day but she has gone to the paddock now and we’ll bring her back and see where we are at,” Osborne said.

“Any horse that can win in its first two or three runs has got a bit of above average ability and even in her first start she had a lot of excuses not to finish closer than where she did.

“We are not getting carried away but as Daniel Bowman said, you haven’t got a Group horse but she’ll be handy.’’

The dam Fast Impulse has a fully yearling sister to Red Impulse, as well as a Boulder City colt which will both be offered for sale.

Osborne said they were extremely pleased with the performance of Redente.

“We are having a really good run,” he said.

“He quinellaed that race which we won last week.

“He has done a magnificent job. He is only a $3000 service and that includes the vet fees.”

Osborne describes the 14 year-old son of Encosta De Lago as the unluckiest horse around.

After winning the Group 2 Sires Produce at Flemington, Von Costa De Hero was beaten a “whisker’’ at his next start in the 2008 edition of the Golden Slipper.

“He missed the Golden Slipper by a nose from an outside gate and one more stride and he wins and he could have probably stood in his first season for $60,000, rather than be forgotten about at Riverbank,” Osborne said.

“He was really unlucky back them and he is holding his own in the country level with his progeny,” Osborne said.

“Skilled has done the same sort of thing and he is going really well on the track and then you’ve got Anacheeva. He has had a nice little period.

“Bon Arum came on board this year and we have got Boulder City which is a half- brother to Winx.”

‘’It’s quite interesting really because he is unraced and whether he raced or not, he has got the same blood lines as Winx has and she is by far the most exceptional horse we’ll see in our life time,” he said.

“It is interesting how people put up cases why they wouldn’t go to him. Even being by Snitzel, there is no son of a Snitzel standing under $10,000 without having Winx’s female line.

“Boulder City’s numbers would only be around the 60 mark this year and I thought it would have gone the other way. For $5000, including your vet fees, I don’t think you’ll get blueblood like that in our lifetime ever again.’’

With seven stallions on the farm’s roster, Riverbank Farm’s main objective is to do everything within their power to get each broodmare in foal with stallions thatdon’t  demand huge service fees

And that’s where Osborne’s veterinarian wife, Caroline, plays perhaps the most important role. She has the reputation of getting troublesome mares into foal and specialises in equine reproduction and neonatology.

“If we don’t get your mare into foal, you don’t pay,’’ Osborne said.

“So the onus is on us to get the mare in foal where I think sometimes people think if your mare is not cycling, the stud is having a lend of them sort of thing.

“I can guarantee that would not be the case in any situation because everyone wants to get them in foal and get it done and dusted, but it’s funny the perception people do have.

“We foaled down 90 foals this year and Caroline would have been the major factor. I think if she wasn’t here we would probably have lost another 10 foals. By the time you call a vet out, it’s often all over.”

With seven stallions, Riverbank Farm also offers agistment and caters for every stage from foaling, breeding and weaning.

It’s a wonder Osborne, who also has two sets of twin children to his credit, has time to train and race his homebred horses.

But he says this is where his daughter Olivia has been an enormous help after doing a course in myotherapy.

Olivia was going to do another course which she can now start next year so she returned home and has been concentrating on the racehorses.

“So she has been putting her hand up saying it is all about her,” Osborne joked.

“We just do our own and don’t train for anyone else. We are quite happy with the way things are poking along.

“We have got about 14 and do a lot with two year-olds and try to get them going. Our aim this year was to run one before Christmas and we took one down on Cup Day and she ran really well but lacked that bit of ability at that level at that stage.”

Osborne said the farm on the Broken River at Benalla is very much a family affair.